skip to main | skip to sidebar

Quilting above the Arctic Circle 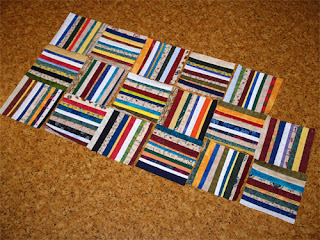 I've been sewing alot lately. I started on Thursday between the dress rehersal and the opening concert at the Ilios-festival in Harstad. It's a festival of contemporary music. I played an insanely difficult piece and I needed to relax before the concert. I've been admiring Bonnie's work for a long time and I decided I was going to try out the Basket weave technique. I had a lot of strips narrower than 1.5 inch so I poured them out on my table and started sewing a light one on to a dark one. I cut, sewed and ironed, cut, sewed and ironed and after a couple of hours work I had some blocks done. The best part was that I was totally relaxed after that sewing session. I continued to sew yesterday and this morning also, and now I can present 17 blocks! I don't know what to do with them yet, but I hope to put them in a contemporary kind of work. It would suit the music I've been playing this week.

Thanks Bonnie for the inspiration!

Very nice way to use up some scraps. They look really good the way you have them laid out. IT's hard to go wrong with scrappy.

The colors are great. I know you will find a way to put them together to make a fabulous quilt. My DD played the clarinet and it does remind me of some of the music she played.

Cool blocks!!! I too think strip piecing is relaxing.

I like how they look. You did good work. I wish you could share your music with us !
You will find the perfect way to put those blocks all together.

Very nice use of strips - clean and modern looking. Thanks for the photo.

Wow! I like those blocks. Very striking next to each other. I hope your concert went well.

This looks like a great way to use up all your scraps. Bonnie has so many beautiful patterns on her site.